About the FIRST2FINISH COmpetition

The top four (3) performers, per the leaderboard, of each stage from the First2Finish Competition will win a prize and/or a trip to compete in the TCO22 Finals in the USA on dates and a location to be determined at a later date.

First you must become a Topcoder member and start competing!

The competition is free but you must be a member who is 18 years or older, as well as meet all eligibility criteria, in order to participate. 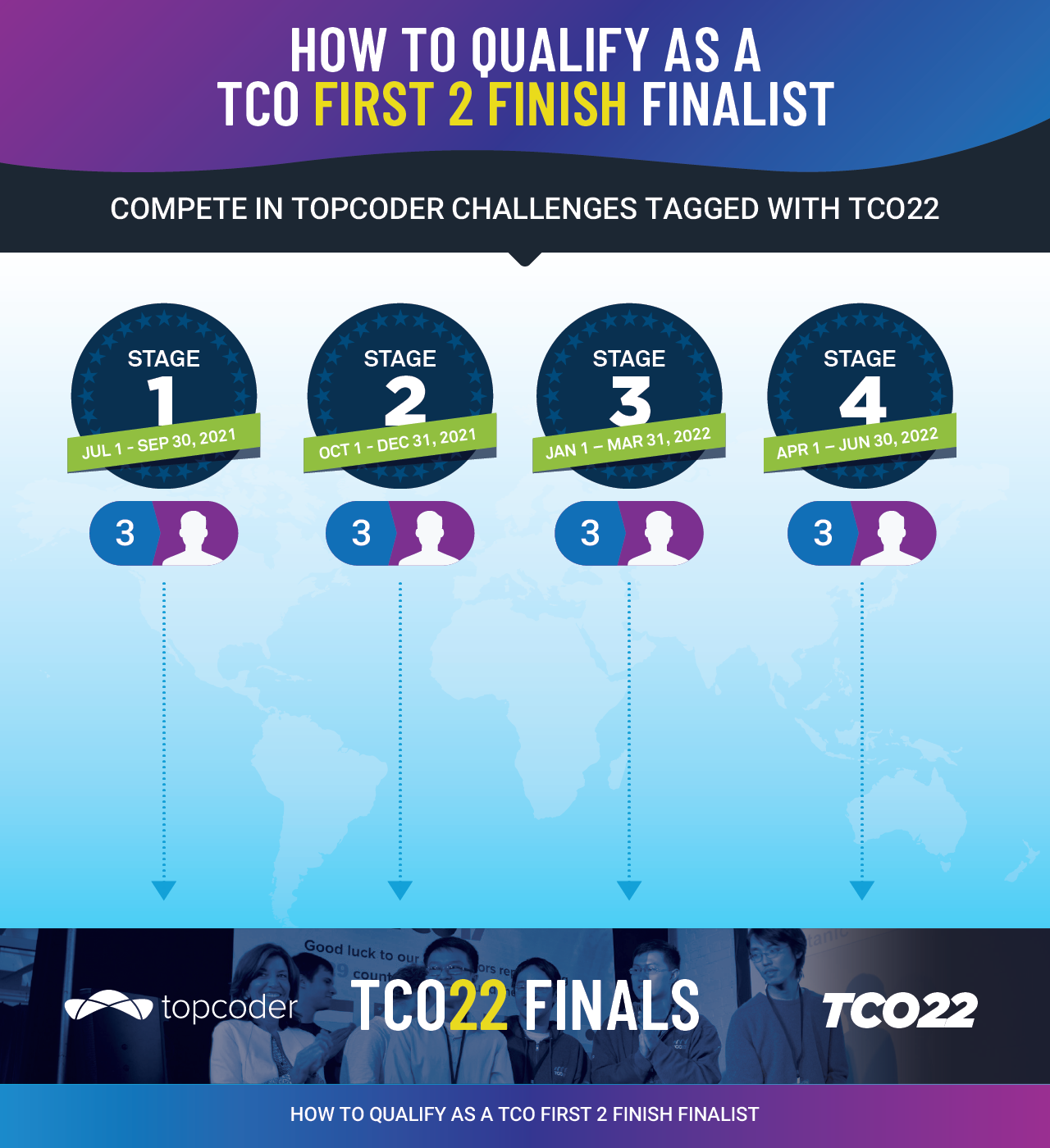 The top three (3) performers, per the leaderboard, of each stage from the First2Finish Competition, will win a prize and/or a trip to compete in the TCO22 Finals in the USA on dates and a location to be determined at a later date.

Topcoder reserves the right to add or remove competition tracks as needed. Competition stages and prizes may be changed at any time at Topcoder’s sole discretion.

During each Stage, Contestants who participate in Tournament-eligible First2Finish Competitions on the Topcoder website will receive points for that Stage as outlined in these Rules.

Only Tournament-eligible First2Finish Competitions in which registration has opened during the four (4) Stages shall be included in determining points for that Stage.

All Tournament – eligible First2Finish Competitions will be clearly marked on the active challenge listing page.

NOTE: A maximum of 400 points can be awarded to a competitor in one single challenge (i.e. a member winning a First2Finish challenge with a prize of $1200 will earn 400 TCO Points).

Upon the completion of all Tournament-eligible First2Finish Competitions, the individual scores that a Contestant receives during all Stages will be added for a cumulative score.

Private F2F challenges and tasks that are not open to the majority of the community will not be included at this time. This may change for future stages. Topcoder will determine at its sole discretion if a F2F challenge/task will be included in the tournament.

In the event of a tie for a Stage, the tie will be resolved in the following manner:

The tied Contestant with the highest number of first place submissions will receive a higher placement in the First2Finish Competition in that Stage.

In the event of a tie, the tie will be resolved in the following manner:

Any and all applicable taxes on prizes are the sole responsibility of the prize winner.

The F2F Competition will also award prizes in the form of T-shirts (one per Contestant). T-shirts will be awarded to the following Contestants:

To get the prize, Competitor must have positive points in that particular stage. In the event of a tie in for the 10th place, all competitors with that score will earn a t-shirt.

These rules may change at any time with or without prior notice.

Round Has Not Begun

Round Has Not Begun